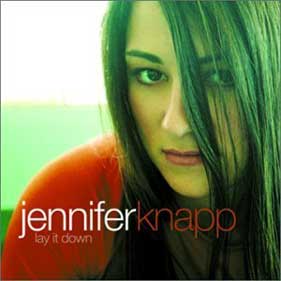 Despite the salacious title I am not really going to talk much about the recent news story regarding “Christian Music” star, Jennifer Knapp.  Suffice it to say that a number of people have asked my opinion of the Dove Award winning singer announcing she is in a homosexual relationship on the eve of her new album release.

There is much to be said about the relationship of contemporary American culture’s view of homosexuality and a Biblically orthodox view of the same behavior.  I have heard no hermeneutical gymnastics clever enough to convince me that God has revealed in the Bible any other plan for families than one man loving one woman for life as a clear picture of the love of Christ for the church.

On the other hand, many conservative churches have exploited homosexuality as a sin that is particularly heinous and gross.  Homosexuality is much harder to hide, but it is no worse than the sins I commit.  Even if it is worse (which Biblically it is not), the grace of Christ is sufficient for every sin.  During his earthly ministry, Christ demonstrated healing and love consistently and clearly to the people that society deemed as gross and dirty.

However, Biblical interpretation regarding the issue of homosexuality is not my greatest concern.  What I find interesting is the way “Christian celebrities” are deemed as more important or as experts.  When a Hollywood celebrity speaks on a political issue, many people get upset because being a celebrity does not make you an expert.  The same is true in Christian subculture.  Jennifer Knapp is not particularly qualified to speak on the issue of Biblical interpretation.  She is no more qualified than any other believer.  Celebrity is not a mark of authority.  In the debate regarding homosexuality, our decisions must be made on ideas, not on personalities.  No matter what side you are on, there is a desire to stack experts and celebrities on your philosophical side.  This is a mistake.  Let us discuss issues and ideas rather than people.

I know that Jennifer Knapp is not the first Christian to “come out of the closet.”  She is not even the first Christian musician to come out of the closet.  There are a number of people in our churches and communities who are dealing with these same issues.  I would rather not make decisions regarding sexual ethics on the choices of “Christian celebrities” (be they pastors, musicians, actors, etc.) but on the authority of the Bible faithfully interpreted.

Let us relate with truth and love to any with whom we disagree.  In a debate you are not trying to win an argument but a person.  My prayer is that Christians would search the Scriptures more than the local news.