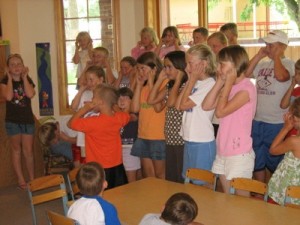 This week at camp the speaker gave a really helpful illustration when talking about integrity.  At one point he had the kids play a version of Simon Says called “Head, Belly, Knees.”  When I first played the game I remembered how much easier it is when you close your eyes and listen to the commands rather than trying to imitate.

The speaker, however, used this fun children’s game as an example of the importance of Christian integrity.  Every time he said one thing (i.e., head) but did something else (i.e., touched his knees), a number of students would imitate him rather than listen to him.  The point was clear, it is a much easier game when the leader’s actions match up with his words.

While my hypocrisy might not prevent someone from coming to know Christ, it will make it much more difficult.  I pray that my actions match my words.