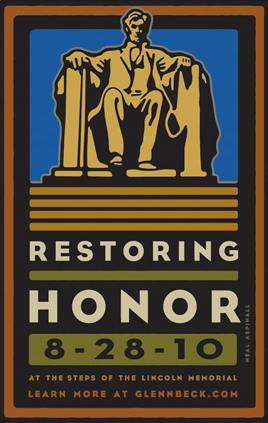 Glenn Beck is a regular topic of discussion on this blog (see here and here).  My reservations about Beck are numerous (both political, ideological, historical, and theological).  Recently, Beck’s “Restoring Honor” rally has gained much attention.  Some have lauded Beck for showing courage to stand for America’s “founding values” and others have cautioned evangelicals to be careful with whom they partner (at this point the essay by Russell Moore is genuinely helpful).  Not only has Moore weighed in but Doug Wilson and Scot McKnight have offered some commentary on the situation.

One denominational side note that I found disappointing was the alliance of Richard Land (president of  SBC’s Ethics and Religious Liberty Commission) with Beck as part of his multi-faith “black-robed regiment.”

Outside of Moore, Robert Parham has proven to be the most helpful.  He not only provides insightful commentary about the dangers of civil religion and generic, theistic alliances, he does so with ample quotations from the actual event in question (“Restoring Honor” on August 28, 2010).

Fox News host Glenn Beck muddled biblical references with fragments of America history, recreating a pottage of civil religion that says America has a divine destiny and claiming that a national revival is beginning…

It is insightful to note that the definitions of god provided by these various clerics are so broad that god is probably not even a sufficiently meaningful category.  Whose God?

No amount of Bible reading, sermons masquerading as prayers and Christian hymns can cover up Beck’s civil religion that slides back and forth between the Bible and nationalism, between authentic faith and patriotic religion.

He treats the “American scripture”—such as the Gettysburg Address—as if it bears the same revelatory weight as Christian Scripture.

What is important to Beck is belief in God—God generically—not a specific understanding of God revealed in the Biblical witness, but God who appears in nature and from which one draws universal truths.

Not surprisingly, Beck only uses the Bible to point toward the idea of a God-generic…

One thought on “Some More Glenn Beck Discussion”