Today the announcement that Liberty University was partnering with Benny Hinn Ministries hit the interwebs. The relationship seemed official. The course material bears the name “Liberty University.” There is even a mock diploma with the name and apparent official seal of LU. The provost of Liberty is in the video with Hinn and a prominent Liberty donor endorsing the partnership. There have been past internet grumblings of associations between late Liberty founder, Jerry Falwell, and Hinn but we all know how hyperbolic the internet can be. 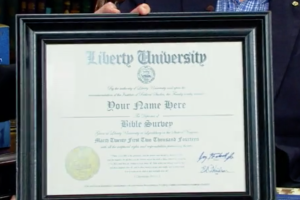 Many (most?) evangelicals would consider Hinn’s theology and ministry practices to be clearly aberrant. Sproul has argued that heresy is a fair description of Hinn’s teachings (not too mention his lavish lifestyle and spending). Especially those associated with the more conservative strains of American Evangelicalism (e.g., Liberty University) have been quick to denounce the word-faith theology and pseudo-miraculous claims of Hinn. So any such partnership would immediately cause shock.

Within minutes of the announcement there were affirmations and denials of such a partnership. Liberty issued a statement:

“Liberty University is not partnering with Benny Hinn.  Liberty transferred the operations of Liberty Home Bible Institute, a non-accredited biblical studies certificate program, to Mr. Dan Reber a number of years ago.  It is our understanding that LHBI’s new operators are working with Benny Hinn but LHBI is no longer operated by Liberty University.  Mr. Reber was granted certain licensing rights to use Liberty’s name because the Liberty name was deeply imbedded in LHBI course materials.  He was also required to obtain permission from Liberty University for any changes in marketing of the courses and Liberty University is investigating to determine whether this new marketing approach violates the terms of its agreement with Mr. Reber.”

The statement echoes the problem with the partnership. Liberty does not want to be connected to Hinn. Liberty definitely needs to investigate. Yet, while Liberty claims LHBI is no longer operated by the university, their website implies something different. Not only is LHBI on the liberty.edu website, it boasts that an LHBI degree is transferrable toward an LU degree. Further, the current Senior Vice President for Academic Affairs and Liberty University Provost is seen in the video endorsing this partnership.

So what hath Lynchburg to do with Hinn? In my opinion: too much.

There is no place for LU or its subsidiary institutions, much less its prominent faculty to sacrifice Biblical fidelity and sound Christian theology at the altar of a pragmatic partnership with a theologically and ethically suspect televangelist.

*Besides, we all know that Hinn is really from the dark side.