So where are all the “Save the Gulf” concerts? Where are the TV benefits with celebrities & musicians giving heartfelt speeches on the poor fisherman, wildlife, beaches, loss of income and sabotaged Gulf economy? I find it rather strange how these people (including our own government) are so quick to help Haiti & other countries, but sit on their hands for this American disaster. POST IN SUPPORT If YOU AGREE! 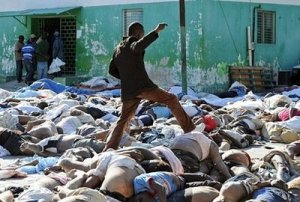 The silliness and insanity of this statement shocked me.  This statement signifies misplaced nationalism, lack of perspective, and an inappropriate concern with money rather than human lives.   The Gulf Coast will be seriously affected by BP’s ineptitude (e.g., tourism, wildlife, economy, jobs, etc.), but the earthquake in Haiti killed more than 200,000 people, left several other hundred thousand people injured, and many more homeless.

The death and injury of hundreds of thousands of human beings is incomparable to a the negative effects of the BP Gulf oil spill.